Located exactly where the Dodecanese meet the Cyclades, the island of Astypalaia boasts a centuries-old history, whitewashed villages and sun-drenched beaches. Embark on a fascinating trip where the deep blue of the sea meets the bright white colours of beautiful island houses…

Astypalaia, the westernmost island of the Group, is naturally separated into Mesa Nisi [the inner island] (western part) and Exo Nisi [the outer island] (eastern part) by a thin strip of land less than 100 m. wide.

The island was named after Astypalaia, the daughter of Phoenix and Perimede. In the old days the island was also called Ichthyoessa due to its abundant fishing grounds. It was first inhabited in prehistoric times. In 1204 it came under the Venetian rule enforced by the Guerini family until 1537 with the exception of a brief period in time (1269-1310) when the Byzantine Empire took over again. In 1537 the Turks occupied the island. As is the case with the other Dodecanese islands, Astypalaia remained under Turkish rule until 1912; it was then conquered by the Italians, the British, and the Germans until it was finally integrated in Greece in 1948. There are ferries to Piraeus and Kalymnos and flights to Athens and Rhodes Airports.

Chora is the island’s capital town and port. It is one of the most picturesque towns in the Aegean, perched on a rock that advances into the sea, forming two bays. On the top, you will see Chora’s castle towering over the town with the strikingly white domes of Evangelistria and Agios Georgios churches, visible over the walls. Around the castle lie Chora’s houses with whitewashed walls, blue doors and windows, and wooden balcony rails. 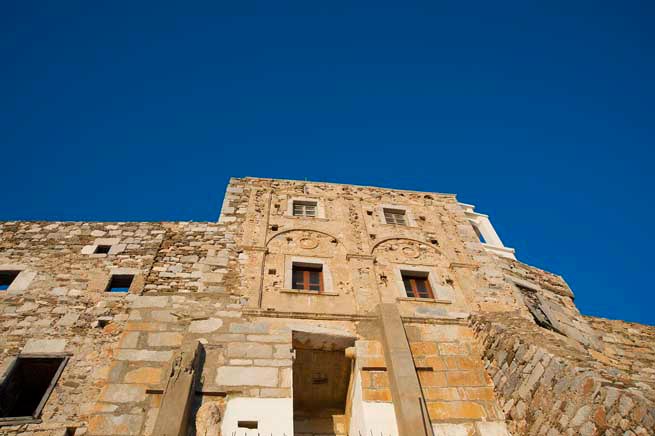 To the Venetian Guerini Castle (13th c). The small three-storey houses built in the castle’s outer grounds are of particular architectural interest since the outer walls of the houses form the castle wall and narrow windows were used as battlements. Within the castle there are two churches, painted in a pure white colour, with elaborate stone belfries: Panagia Evangelistria (1853), inside which you will see the founders’ inscription dated 1413 and the Guerini coats of arms; and Agios Georgios.
To the 18th-century Panagia Portaitissa church below the castle, one of the most beautiful churches in the Dodecanese with a woodcarved, gilded iconostasis. Right next to it there is an interesting Ecclesiastical Museum.
To Narkisseios Municipal Library, also housing the island’s archeological collection.
To the Archeological Museum in Pera Gialos where finds from the island are on display. Most of them date back to the prehistoric times when Astypalaia had prospered.
To the eight windmills located over Skala, at Chora. They belong to the xetrocharis category, a horizontal axis type with the roof turning according to the wind direction.
To Kylintra, bordering Chora on the south side. It is the site where a burial ground for infants was excavated – the only one known to have existed in the whole world. This place was considered as sacred ground since the Geometric Period and up to the Hellenistic times.
To Megali Panagia. Its courtyard features a remarkable pebbled floor.
To Panagia Flevariotissa, 6 km NW of Chora. Part of the church is built inside a cave. It has an interesting woodcarved iconostasis.
To the Monastery of Agios Ioannis o Makrys (12 km W). It is built in an impressive landscape between two forbidding slopes, overlooking the open sea and offering a spectacular sunset view.
To the castle of Ai-Giannis, opposite the monastery by the same name.

Livadia
Livadia is a seaside village with few residents, built in a fertile valley. There are citrus fruit groves, vineyards and houses overflowing with flowers, creating a delightful setting next to a lovely beach. Distance from Chora: 2 km SW.

Must see:
Negros cave, at Vatses (6 km SW). Access it by boat from Chora, or follow an organised tour.
Agios Vasileios hill and the ruins of an early-Christian basilica.

Maltezana (Analipsi)
Maltezana is a seaside resort that attracts most of the island’s tourism. It has been named after the Maltese pirates who made their hideout on the island. This is where the French Admiral Bigot set his ship on fire in 1827 so that it may not be captured by the pirates. Distance from Chora: 9 km NE.

Must see:
Talaras Baths and their Hellenistic period mosaics that are unique in the Hellenic world coloured in light blue and brick shades as well as an interesting composition that depicts the four seasons and the symbols of the zodiac.
The monument of the French Admiral Bigot who led the struggle against the pirates in the early 19th century.
The ruins of an early-Christian basilica (5th c.) with remarkable mosaics. Agia Varvara chapel was built over those ruins using the existing Ionian capitals as building material.
Analipsi church, the village’s oldest one.

Vathy
Vathy looks more like a lagoon due to its protected inlet (having an opening of about 50 m.). It comprises two small communities: Exo [outer] Vathy at the inlet entrance with a small wharf for mooring boats; and Mesa [inner] Vathy in the nook of the cove next to cropland, sparse tree vegetation and vineyards. Distance from Chora: 21 km NE.

Must see:
Chameni Limni [lost lake], a lagoon in the NE side of Astypalaia.
The ruins of a Minoan settlement and tower situated at the entrance to the cove.
Drakos cave, where you will see impressive stalagmite and stalactite formations. Access the cave by boat or on foot
Panagia Poulariani church, on the way to Vathy. It is built on a rock formation which looks like the Virgin Mary holding the Baby Jesus.