The perfecture of Lefkada includes the island of Lefkada, Meganissi island with an area of 20 square kilometers, the Kasto and Kalamos. The island is joined to mainland Greece with a floating bridge 20 meters, split with mainland Greece to the Strait Drepanou. It is very easily accessible by road or by boat.
Most of the island is mountainous with the highest peak Epano Pyrgo (Upper Tower) with a height of 1126 meters. The climate is temperate with the rare occurrence of snow. Crops that thrive in the region are those of olives, vines and cereals. Favourable winds and sandy beaches make it ideal for water activities.

Lefkada is an island of the Ionian Sea, located to the opposite of the coast of Aetoloakarnania region. The island is inhabited since the Paleolithic era as testified by the archaeological findings. Lefkada was formerly known as Agia Mavra, because of the namesake temple located at the medieval castle, just outside of the capital.

The island is connected to mainland Greece by a narrow bridge, making the island easily accessible. Select Lefkada as your next tourist destination and enjoy the unique natural landscapes with the world famous beaches!

Browse the narrow streets of the city of Lefkada and the coastal front. Walk through the ‘Park of Poets’, known as Bosketo and admire the statues of Lefkadite poets. At sunset, take a romantic walk on the bridge of ‘ Valentine’s ‘. Within a short distance from the town, is located the beach Gyra hosting four windmills worth seeing.
Undoubtedly, Lefkada is known for its world famous beaches. At the southwestern coast of the island are formed the unique beaches Porto Katsiki and Egkremnoi. The landscape of these two breathtaking beaches is dominated by huge rocks that rise on the coastal front. Even though access to the beaches requires a few minutes downhill through appropriately shaped paths, the turquoise waters will definitely compensate you!

Activities you can participate in the island for those who love sports are the green Lefkada Half Marathon is held annually on the last Sunday of May, you can also participate in international water sports competitions at the end of June, and mountain bike races which are held every year April in the mountain villages of Sfakiotes. Sports that you can indulge in the beaches of the island are: wind surf, kite surf, biking, paragliding, horse riding etc. 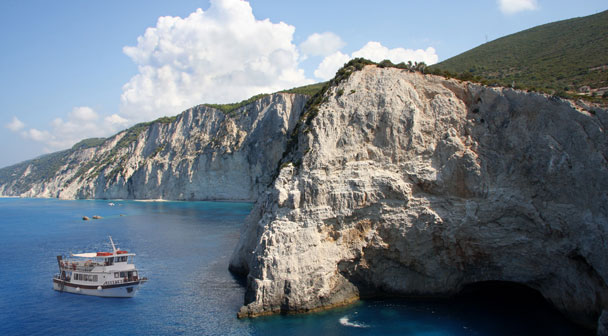 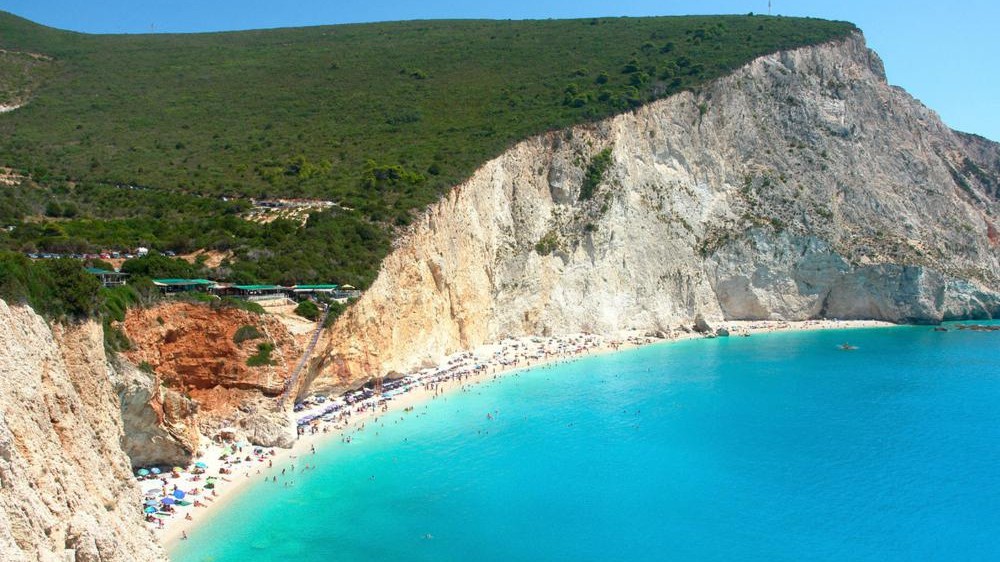 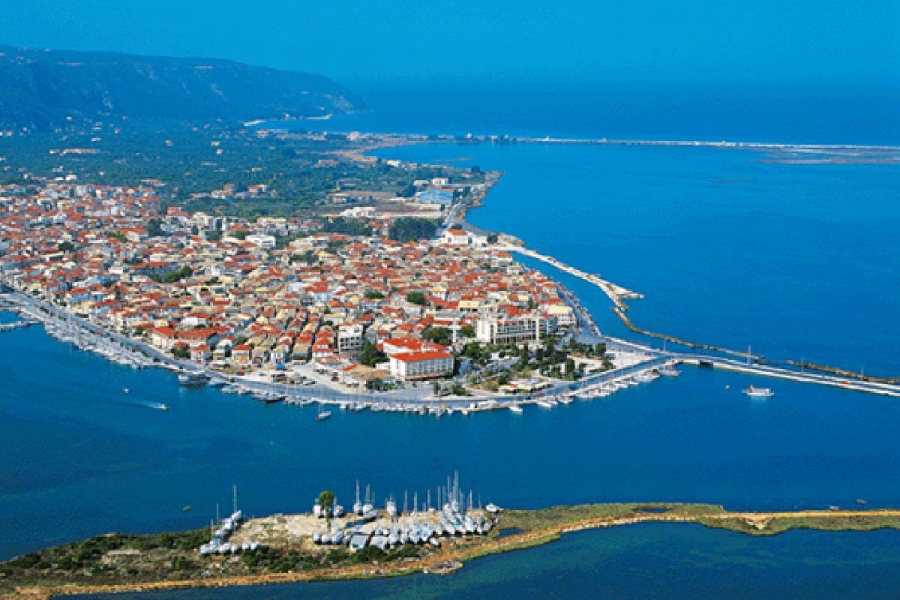 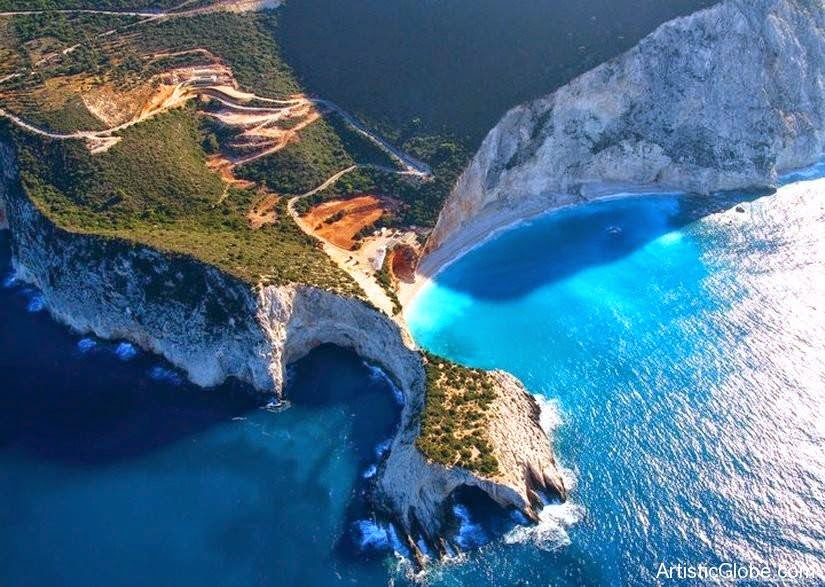 Town promenade
To the lagoon, one of the Ionian Sea’s most significant wetlands, protected by the Ramsar Convention as a wetland of international importance. There is also an ivari, a fish farm where fish grow in their natural environment.
To Agia Mavra fort, at the town’s entrance, constructed by a Sicilian named Giovanni Orsini in 1300.
To Bosketo Park, where busts of the island’s eminent scholars are to be found.
To the pedestrian zone along the coast lined with the younger generation’s hangouts.
To the central square with many restaurants and cafés where Agios Spyridonas church is located (late 17th c.) with an interesting iconostasis and icons. The main town mall (along Melas Street) starts from this point.
To Kouzounteli (or Kouzoumpei) area, where age-long plane trees stand next to traditional coffee shops that serve freshly ground coffee and soumada drink made from fragrant almonds.
To the Archeological Museum. Finds (mid-Paleolithic times – 4th c. AD) come from tombs excavated at Nydri, burial grounds of the ancient town of Lefkada, etc.
To the Public Library. There is a wide collection of printed documents and post-Byzantine icons painted in the style of the Eptanesian iconography school by eminent religious iconographers such as Doxaras, Roussos, etc.
To Charamogleios Eidiki Lefkadiaki Library (a library treating exclusively local themes) exhibiting rare books, gravures and maps. The art gallery is often the venue for painting and photography exhibitions. The library’s collection has been included in the Guiness Book of Records.
To the “Pantazis Kontomichis” Folk Art Museum. Exhibits include a wide and rare collection of items related to local everyday life and work.
To the Phonograph-Memorabilia Museum whose exhibits include old phonographs, vinyl records, decorative antique items, old banknotes etc.
To the agelong Elaionas (Olive Grove).
To Megalos Avlaimonas and Mikros Avlaimonas wetlands, two natural-habitat fish farms near the city.
To the windmills at Gyra.

Ai Yiannis, Mili
Preferred by wind and kite surfers. They cover a stretch of 4.5 km and the waters are turquoise coloured. You will find tavernas and cafes here.

Gyra
A particularly popular beach opposite the village of the same name, with two tavernas.

Kastro
A beach with pristine waters frequented mostly by locals, lying opposite the pontoon bridge accessing the island behind the TAOL building.

Ammoglossa
To the right of the lighthouse, opposite the fort of Aghia Mavra. White sand and pure blue sea.

Mylos
The sand is pure white and the deep waters are turquoise, a splendid sight, especially when seen from above. Not accessible by car. The beach is at the end of the scenic footpath setting out from Aghios Nikitas (a 20-minute walk) or you can go by ‘Taxi-boat’.

Pefkoulia
A large sandy beach, clean sea and pines all the way to the shore. Only part of it is organized. Beyond the big rock is an area for nudists.

Aghios Nikitas
The small beach with pure waters of the village of the same name, in front of the cafes and tavernas, it is preferred by families. On the left, between Mylos and Aghios Nikitas there is another stunning beach, Ammoudoula, accessible only by swimming to it, where the cave Fokotrypa stands.

Kathisma
Once the favourite of campers and nudists, it is today Lefkada’s most cosmopolitan seashore, organized with umbrellas, loungers, beach bar and restaurants. The sand is white and pebbly, the sea blue-green. Take care however!When the northwesterly wind is strong the waves are high and it is best not to attempt to swim.

Kalamitsi – Kavalikefta – Megali PetraAvali
There are three sand beaches near this village, with turquoise waters, white pebbles, sand and rocks for all preferences.There is a canteen and a few umbrellas and deck chairs.

Gialos
Just before Athani there is a big sandy beach, also for campers and with a canteen.

Egremni
A famous beach 2 km long surrounded by impressive cliffs, considered one of the best of the Mediterranean. The landscape resembles the Caribbean, the water a transparent aquamarine and pristine. There is a canteen beyond the parking lot and another on the beach, which is at the bottom of the 350 steps you have to go down.

Porto Katsiki
A strip of pure white sand at the foot of a towering white rock: the picture is familiar as it was awarded the prize of the loveliest beach in Greece and appears on posters promoting tourism. To get there you go down a steep path with a hundred steps from the parking lot (with plenty of canteens) or by caique from Nydri and Vassilki.

East
The beaches on the east side are not as impressive as those on the west, but they have a great advantage: they are sheltered from the wind and always calm and safe.

Lygia – Episkopos – Nikiana – Periyiali
The beaches of the eastern side begin just after the picturesque harbour of Lygia which is 6 km from Lefkada town. As far as Nydri (17 km from town) you will find countless and quiet beach spots. The scenery is striking, especially in the Nikiana area and the greenery reaches almost to the water’s edge. There are restaurants and lodgings all along the coastline.

Nydri
Much frequented by the people staying in Nydri, it is fairly crowded.

Dessimi
In a bay on the outer shore of Vlychos peninsula. It is small and shady and perfect for canoeing, to explore the little sandy coves and caves along the coast. It is pebbly, with two organized camping sites in the bay.

Mikros Gialos
Below Poros village, a peaceful and attractive beach with pebbles where the sea is unpolluted, in sheltered Rouda Bay and nearly always calm. There are camping sites, hotels and restaurants in the area.

Ammoussa or Amousso
Close to Vassiliki. You get there by a detour of the main road at the village of Marantohori. It is small, with pebbles and there is a taverna, a café and residences.

Aghiofili
One of the island’s best, in a very pretty cove to the left of Vassiliki. The waters are a pure blue-green. You can take the little boat from Vassiliki or go along the path beginning from the southeastern side.

Vassiliki
The village’s beach, beloved by wind surfers. It is classed among the Europe’s three best beaches for windsurfing. This is where the international water sports festival takes place (www.vassiliki-watersports-festival.com). The sea is invariably calm on the west side.